What Do the Germans Think? Solana's New ESS


It's quite interesting what you can find out if you search for keywords in other languages. One language I have been doing this with is German. A couple interesting things popped up.

Here, one of the Task Force members is giving the "Solana Paper" to Mogherini, at the Interpaliamentary conference in Riga on defence. The title of the page says:

The interparliementary conference is a meeting of lots of officials from various countries on the matters of defence.

One of the "side events" at this conference was a presentation by Hans Peter Bartels of Solana's plan for a European Defence Union. Here is the text of that speech. 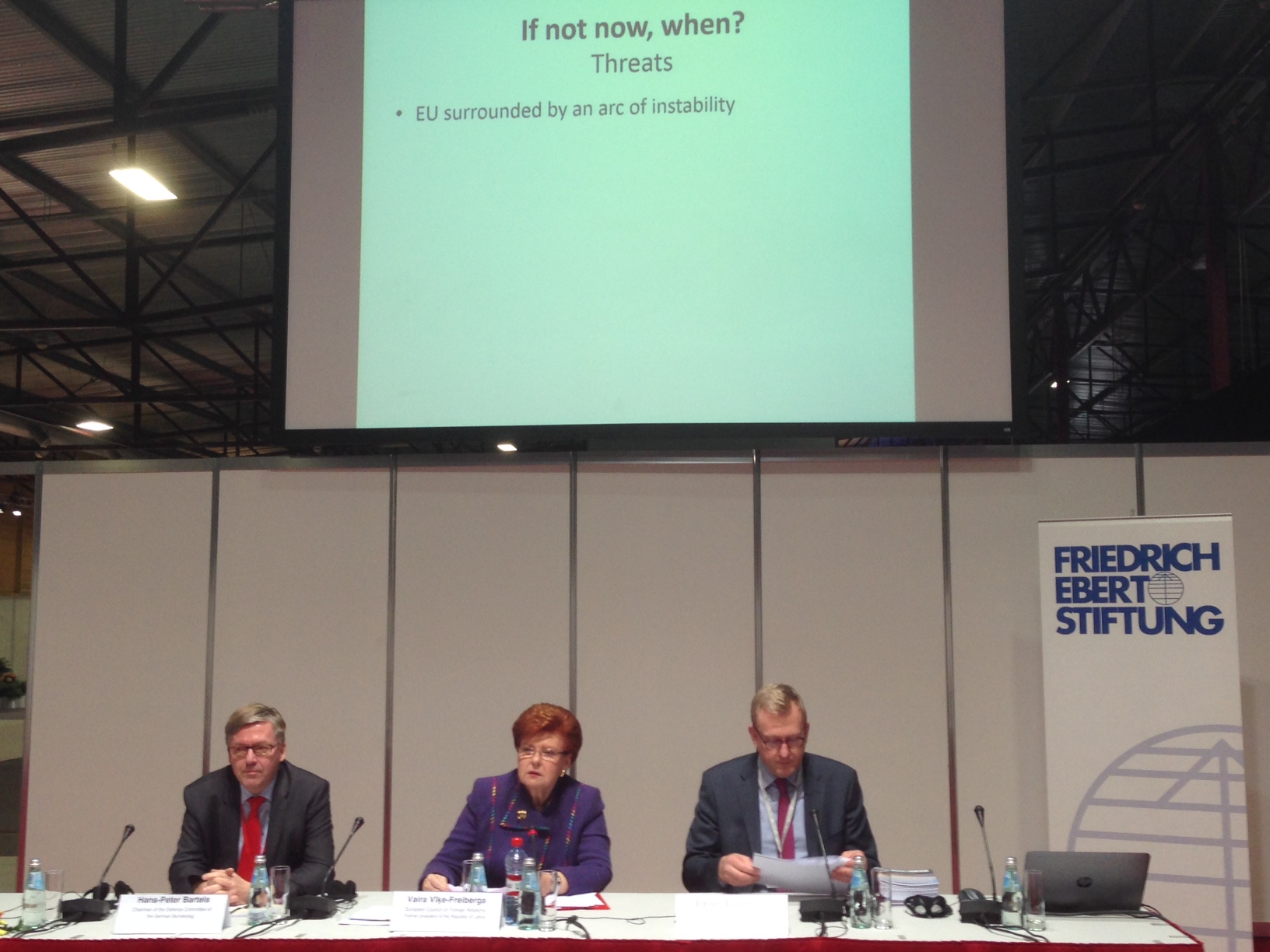 Some interesting things in there. First, he is quite blunt. Second, he proposes something the Solana paper does not: an EU defence commissioner. In addition, he very forcefully advocates for an EU military headquarters and a Council of Defence Ministers configuration.

He says the following at the end of his speech (which he gave in English):

Sixthly: We need a new European Security Strategy, which will have to address all these issues. In restrained diplomatic language, of course. The ESS of 2003 was a milestone because it established Europe’s commitment to multilateralism against the Bush-doctrine of that time and America’s commitment to unilateralism

So lets make a new EU security strategy, addressing all the issues in Solana's plan. And lets make sure its in "restrained diplomatic language" so the public doesn't get too worried about it. Concerning....and not very transparent.

Go here and see the conclusions of the Interparliamentary Conference in Riga. The conclusions involve many of the same ideas that Solana agrees with

What do the newspapers say? Here is what Euractiv.de says:

The former EU High Representative and NATO Secretary General Javier Solana will present the results of an international expert group in Brussels on Monday. Recommended therefore is a new European security strategy, a "political and military ability to conduct autonomous intervention operations outside the borders of Europe" and the establishment of a military EU headquarters in Brussels. (Google Translate)


The German newspaper Die Welt agrees with this characterization:

Must feel vindicated Juncker also by former EU foreign policy chief Javier Solana and NATO Secretary General. The Spaniard is on Monday in Brussels the results of an international group of experts. The developed in six months paper ("More Union in European Defence") recommends a new European security strategy, a "political and military ability to conduct autonomous intervention operations outside the borders of Europe" and the establishment of a military EU headquarters in Brussels. (Google translate)

Newspapers sometimes borrow articles and wording from each other, as it seems to be the case here. But its interesting they say that Solana is proposing a "new European security strategy" since he was the one who made the original, and now they are calling for a revision. This could be a mere matter of semantics, since that is, in fact, what the Solana Report really is. It is a strategy about security, hence a "security strategy." But it seems Hans Peter Bartels, who was on the Solana task force, views it as a recommendation to Mogherini for her new European Security strategy. This new ESS is supposed to be in the works, but has not been unveiled yet.

Germany is backing the plan for an integrated armed forces, apparently the Solana plan. They will begin integrating some of their own troops under Dutch command, to show their commitment to armed forces integration. This is not something that must be unanimously agreed upon. The Solana plan recommends the use of "Permanent Structured Cooperation," which is kind of like the Eurozone, in that only those who agree to it move forward with it. In fact the paper proposes a "defence group" (i.e. like the "Eurogroup"). But instead of finance ministers, it proposes it be a Council of Defence Ministers , which can meet in PESCO format (i.e. only the willing participants).

In another article by Blockmans, who technically authored the Solana report, he spells it out and proposes a "Eurogroup of Defence Ministers." (Careful going to that article (i have not linked to it). It might have a virus, perhaps unbeknownst to the website owners. If you go searching for it, use the wayback machine to get an image of the site.)

Which makes it very interesting that Solana doesn't propose one chair for this new PESCO Steering Group, but two chairs, one of whom is the High Representative:

Who will fill the other chair?

This paper, by two PSC members in 2008, propose a very similar strategy that the Solana plan does. In this academic work, they state this interesting fact:

One could argue that the provisions of the Lisbon Treaty codify, in some ways, the current practice. In theory, the CFSP High Representative presently has no right of initiative and he/she can only speak “on behalf of the Council at the request of the Presidency”. In practice, however, Javier Solana often leads the Troika at international meetings and conferences; he meets or speaks daily with foreign officials; he regularly issues statements, which are perceived by the outside world as reflecting the Union’s position, even when he has not been thus requested by the Presidency; he submits to the Council, either on his own or in cooperation with the Commission, several papers containing ideas and recommendations on the course of action that the Union could follow on specific issues; and he sits at the negotiating table with third parties on highly sensitive issues, mandated by the Council (actually, in the case of the Iranian nuclear program, not just by the EU, but also the US, China and Russia).

In reality, I should stop blogging and speculating and just wait until the June Summit, which everything seems to be pointing too. But I don't want us to wait that long and be disappointed. We have been disappointed by too many EU summits. Pray God gives us wisdom on prophecy.


Posted by David Wilkinson (Eschologizer) at 11:45 AM