Ok, I admit I cheated on this one. I did google the number. I don't know why it says "United States." (It's probably just the default setting.) But I think it's his actual account. 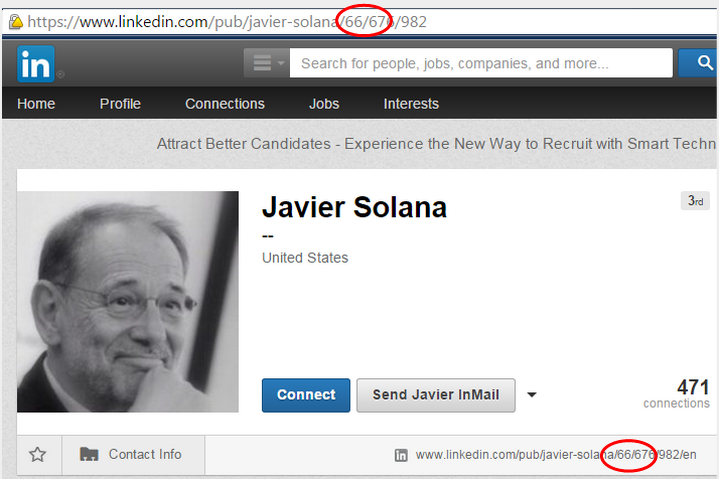 2) An article Solana wrote this week on global governance. Yesterday, I sinned. Then I prayed to God. "God I know I don't deserve it, but please give me wisdom about Javier." And within one minute or two this article popped up in the search results. (I DID NOT google for the number 666!). I had seen the article before on other sites, but I saw that number pop up.

3) A Book I found. Between pages 66-67 (see where my mouse hovers), it recommends "Streamline Decision Making Give Mr CFSP More Resources" namely, Solana. Again, I cheated with this one. 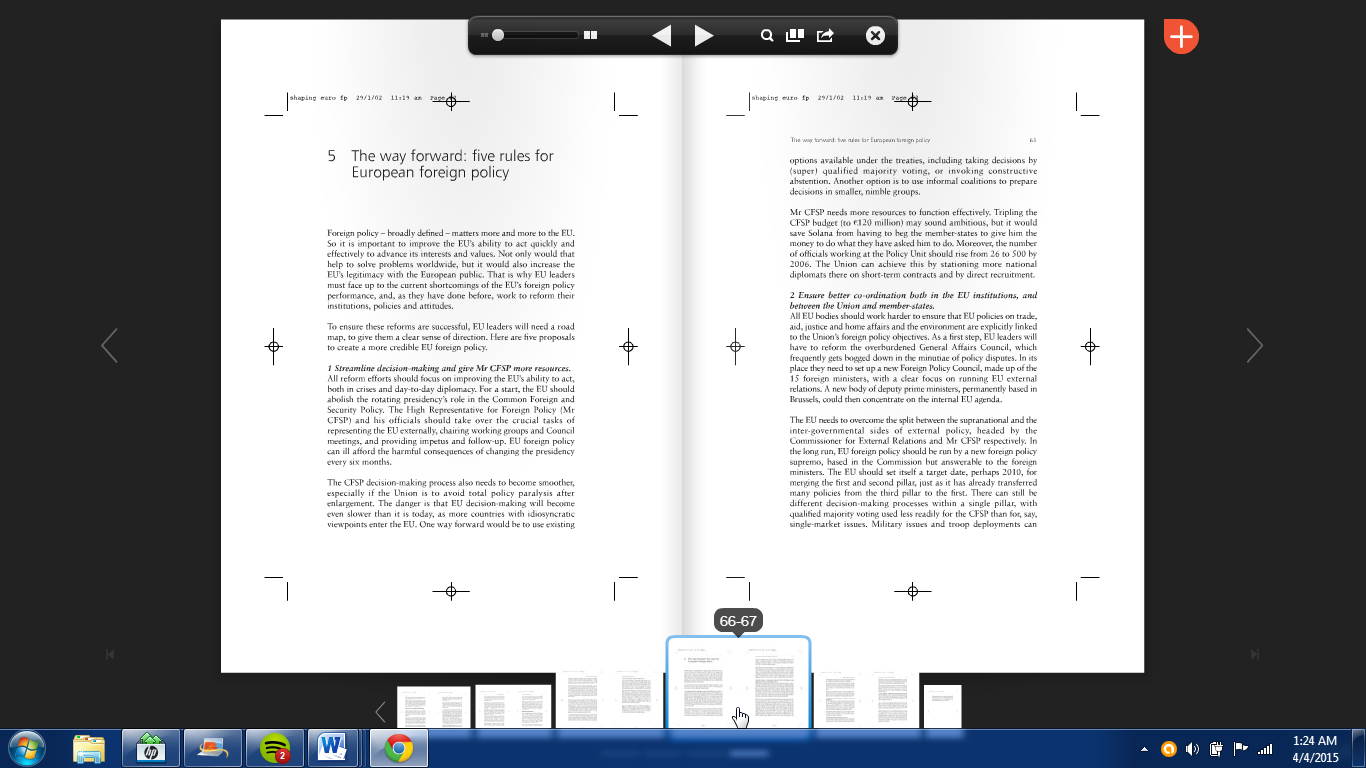 4) Another book I found.


"Dr. Solana also became, together with the Big Three states of France, the United Kingdom, and Germany, a major mediator in Europe's relations with Iran since 2004. He presented the following three advantages. Internally to the EU, he represented all EU states, and not just the Big Three. This was a major issue for small states, which asked for the inclusion of the High Representative in the negotiations (Sauer 2007,10). In Iran itself, he was seen as a neutral actor as opposed to a negative actor such as the United States (Chubin, 2006, 66)." (emphasis added)

Found this one totally by accident when I was researching Solana and prophecy stuff a few weeks ago.

I cheated on two of these (by googling the number). However, one of them almost immediately followed a prayer for wisdom. Be advised that simply Googling for 666 connections to Solana doesn't usually yield impressive results. You'll land on an index to a book with a ton of numbers on it, or you will find some phone number on the bottom of the page with his name on it. Nothing too exciting. It's weird, because many of these experiences have historically followed prayer for wisdom within the the ENP watching community.


This Is Only the Icing on the Cake

This isn't even why he's the best candidate out there. However, it is possible that they represent trail markers from God, telling us where to look and notifying us we are on the right track. The reason we have been so interested in him is because of fulfilled prophecy. Not speculation. But likely fulfillments.

All other Antichrist theories are basically looking for Nicolae Carpathia to come along. A young and dashing European, with a secretly diabolical side, swoops in to solve the worlds problems and save the day. These theories all rely entirely on speculation, and not cold, hard, historical events in recent history.

Attached is my powerpoint on why Javier Solana has fulfilled prophecies about the Antichrist in the past tense. Everybody else is speculation. But he has some actual very specific prophecies fulfilled about him.

This is the first half of the new powerpoint I'm working on. I still have to release the final version. Also, it still needs the references cited. However, it stands alone just fine.


The Antichrist and His Ten Kings? from Eschologizer


One of the claims that I make in the powerpoint is that Solana actually did subdue the EU Big Three. (Evidently, Herb Peters believed this too). For a nuanced explanation on why I believe that, go here. But I will quickly note that the word "subdue" in Aramaic is not necessarily a violent word, and it means to put down, abase, subdue or humble.* Though the little horn is said to uproot three of the ten (seemingly leaving seven), I will also note that all ten kings are present when they hand their power and authority over to the beast. So all ten remain in existence, up until the day they surrender their power to the beast in a very voluntary fashion. It seems the subduing of the three would precede the consolidation event. After all, theologically speaking, what is there to subdue if they already gave their sovereignty to the beast? I believe the historical events of the last 10 years reconcile these two seemingly contradictory passages.

Noticeably absent from this powerpoint is a discussion about the EU's 7-year ENPI/ENI instrument with Israel and other countries. I am still working on how to fit that in and how to present it to someone who hasn't heard of it before. Maybe I will make that a separate powerpoint, instead of one unbearably long powerpoint. If Solana makes his return, he will confirm a seven year treaty with Israel, simply by virtue of holding the office, because of Council Decision 2010/427/EU. This is in sharp contrast with his previous position, which wasn't legally connected to the 7 year covenant, but only the ENP.

Have I gone off the deep end by now posting 666 all over my website? I don't know. Being a fool for Jesus is something my pride will struggle with, but in the end I am more than willing to be. However, much less appealing is becoming a person who has wrongly interpreted the prophecies, and made a fool of myself. God is the judge.

However, I still have a hunch that we are really onto something with Solana. If ENP Theory is still viable, then interpreting him as the little horn (Solana specifically, not the high representative) seems to strain the text the least. If the WEU represent the ten kings of Bible prophecy, then Solana becomes the "only game in town." But it seems we have multiple evidences that we have the right ten nation alliance. So for an easy reading of Scripture, we are stuck with Javier Solana.

I don't know how Javier Solana's career change fits into all of this, and why that was part of the plan, though the prophecies didn't seem to hint at it. It's as if the little horn grows, uproots three...completely goes away, then is the big horn again. Confusing to say the least. One hint might be found here:


I watched as the Lamb opened the first of the seven seals. Then I heard one of the four living creatures say in a voice like thunder, “Come!” 2 I looked, and there before me was a white horse! Its rider held a bow, and he was given a crown, and he rode out as a conqueror bent on conquest. Revelation 6:1-2 NIV (emphasis added)

This is a future event from the standpoint of 2015. This event I have covered in other posts, and is often associated with the launch of the 70th week by theologians. Now, he was given a crown "stephanos." This is not a royal crown for authority, but more like a garland or wreath type crown, that is a reward for victory. (If it was the other type of crown, I would have a much more convincing case.) Nevertheless, the riding out of the white horse is a very conspicuous event that is coordinated by the sovereign direction of Jesus Christ, at the opening of the 7 seals. So it seems this riding out to conquer and victory coronation of sorts refers to a future event where we could have a grand re-entry of someone who was previously out of office? I am speculating. But I'd love to hear other thoughts on this.

Until/if he is revealed as the Antichrist, we are to consider Javier Solana as yet another lost person in need of Jesus Christ. Pray for him.

This week, in the United States, the serious and imminent threat of actual (not perceived) persecution is present. The world turns a blind and approving eye to death and arson threats against Christians, who can be swept out of business overnight, without mercy, for holding to their convictions. And the media applauds. Pray for Memories Pizza parlor. My European readers are probably already all too familiar with this painful experience, which has been going on longer for them than for us in the U.S.

We have to hang in there and hang on to God in tough times. In 2 Thessalonians, Scripture says God is righteous in his judgment and will pay back retribution to these persecutors when he returns. But that is not our wish (nor his!). This week, I have learned that God is a much more merciful and patient person than I could ever hope to be. That is the glory of the cross, that God would die for such wicked and hateful people such as us. That is what Good Friday is all about. The immense love of God poured out for all of us.

When the Antichrist comes (whoever he is), he will make Adolf Hitler look like a mere schoolyard bully by comparison. 666 won't be a creepy and fascinating number, it will be the new swastika, the darkest symbol of the murderous depths humanity can sink to. It will get worse before it gets better. But all of us here long for the appearing of Jesus. And as a result, we will get a crown of righteousness.


Now there is in store for me the crown of righteousness, which the Lord, the righteous Judge, will award to me on that day—and not only to me, but also to all who have longed for his appearing. 2 Timothy 4:8 NIV


*I'm no scholar, so I'm not sure about its connotations in different tenses and cases.
Posted by David Wilkinson at 1:45 AM