The blog posts here have been a bit rapid-fire, as I've already written two last week. So if you haven't seen these yet, check out the two most recent posts:

In this post, we will be discussing the Antichrist's 7-year treaty with Israel. We will also be discussing 7-year initiatives the EU has, especially one's that relate to Israel or military security.


7-Year Covenant: What Does the Bible Say?


"And he shall make a strong covenant with many for one week, and for half of the week he shall put an end to sacrifice and offering. And on the wing of abominations shall come one who makes desolate, until the decreed end is poured out on the desolator.”

Here's a quick run down of the nature of this covenant:
This is why many commentators, theologians, and end time movies portray the Antichrist making a 7 year "peace treaty" with Israel.

The Abomination of Desolation

He then apparently violates it in the middle, ending the temple sacrifices. In this way, he betrays Israel, whom he was supposed to protect. This event seems to coincide with the Antichrist's invasion of Israel (Daniel 11:41; cf. Zechariah 12).

“But when you see the abomination of desolation standing where he ought not to be (let the reader understand), then let those who are in Judea flee to the mountains. (Mark 13:14 ESV).

Paul is more explicit, when he describes the man of lawlessness who sits in God's temple, proclaiming himself as if he is God. This mans arrival is accompanied by counterfeit signs and miracles that deceive the unbelievers. This is consistent with Revelation 13, where everyone is forced to worship a talking image of the Antichrist, whose authority is vetted by the false prophet. The false prophet also performs miraculous signs on the Antichrist's behalf via demonic means. 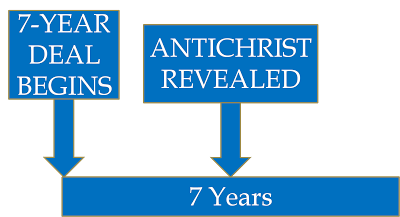 In both Paul and Jesus teaching, this event immediately precedes Christ's second coming. In both Matthew 24 and 2 Thessalonians 2, it is the final singular sign of Christ's return, which happens on an undisclosed day and hour. Nevertheless, Paul and Jesus both emphasize an element of surprise regarding the Second Coming, at least for those who aren't paying attention. This is why I believe the Second Coming/Rapture event is initiated within days, weeks or a few months of the abomination of desolation. (You can see my reasoning for this controversial claim here.)

Regardless, all this is to show that the 7 year covenant in Daniel 9:27 is extremely important in determining the timing of end time events. It is the only prophecy that tells, in advance, when the final singular sign of Christ's return will be. This is very significant, because Jesus describes his return with great immediacy.


“From the fig tree learn its lesson: as soon as its branch becomes tender and puts out its leaves, you know that summer is near. So also, when you see all these things, you know that he is near, at the very gates." Matthew 24:32-33 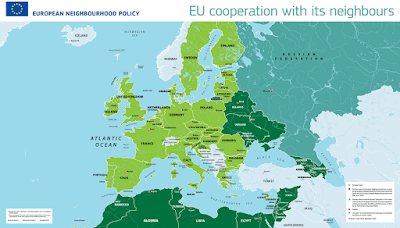 One component that has been lacking from the EU's 7-year relationship to Israel is the promise of protection. Though Daniel 9:27 doesn't explicitly mention this, other passages imply it. Nevertheless, voices from EU politicians have been intensifying in this general "protection" direction:

"This vision takes into account calls for a recalibration of EU defence efforts and, consequently, the Union’s resilience and reputation as an autonomous security provider in its neighbourhood and beyond. We brand this new framework the ‘European Defence Union’ (EDU)." -Javier Solana, March 2015

"The Council welcomes the new proposals to strengthen the security dimension of the ENP, and reiterates its calls for greater coherence of the ENP with the security and foreign policy dimensions of the EU's other actions abroad." Council Conclusions on ENP Review, Dec. 2015

– to include, based on those resolutions’ recommendations and orientations, provisions in a future Union treaty that:
– establish the European Armed Forces, capable of deploying combat forces for high intensity conflicts, stabilisation forces which secure cease-fires or peace agreements[...] (EU Parliament, March 16, 2017)

"We need an European defense union to protect our neighborhood" - @GuyVerhofstadt #BrusselsForum March, 2017 (from Twitter)

With everything above, we see here a convergence of themes. We do not yet have the "covenant with death" for 7 years. However, all of the pieces and parts are falling into place, which will ultimately converge into that. We have:


It's easy to see how all of this could ultimately converge in a future ENP* (or other) agreement, in which Israel is guaranteed protection in exchange for a final status agreement with the Palestinians. Europe has an incentive to stabilize and even "protect" it's neighborhood, so as to stem irregular migration flows and deter terrorist attacks from unstable regions.

In view of the converging themes, a logical step could be to make the next 7-year budget/ENP a covenant of protection for Israel. This would inaugurate the final 7 years prior to Christ's establishment of his kingdom. This would place the abomination of desolation, and the revealing of the Antichrist, in summer of 2024.


That's all for now. As always, I enjoy hearing from you all and the insights that you have. One thing is for sure, this prophecy road is an adventure. What makes this adventure so cool is that God is driving. I remember in 2014-2015 I was racking my brain, trying to make the theory "fit." You all wisely stated that God would be the one to put it all together. And indeed, that has turned out to be the case. We did not make any theory "better." But God, in his wisdom, continues to surprise us with new prophecy news every few months, to his glory.


*Weirdly enough, leading Antichrist candidate, Javier Solana, was quoted on Twitter as saying that the ENP is "over." However, Solana obviously does not think the "Union for the Mediterranean" program is dead, since he was recently video taped at a UfM event discussing the importance of such a program. This is a sub-program of the 7-year ENP, and is financed by it. The UfM is important because it is tied to the 7-year ENP and is very "Romanesque," in that all the member countries (+Israel) look like a map of the old Roman Empire. One can easily see that Solana doesn't want to abolish the EU's relationship to Israel, considering he endorses the UfM. In addition, he is one of the main proponents of stabilizing the neighborhood using military force. Though this is speculative, perhaps he disagrees with the current ENP framework, where neighbors are paid for good behavior.
Posted by David Wilkinson at 1:06 AM