When will the Antichrist be revealed?

In the end times, the Antichrist makes a covenant. There are four features to this covenant.

Many movies about the end times portray a European Antichrist making a 7-year peace treaty with Israel. This has also been widely anticipated by theologians and Bible scholars. Herbert Lockyer said in 1988, ““And he, (the Roman prince, head of the revived Roman empire) shall confirm the covenant with many (of the people of Israel) for one week (seven years)…” 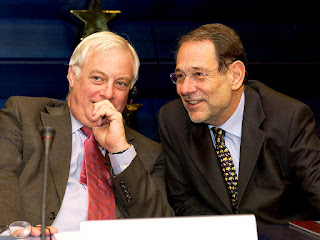 In 2002, Javier Solana and another EU official wrote a letter proposing a European Neighborhood Policy. The goal of this policy was to create a ring of friends around the Mediterranean and Eastern Europe. In 2004, the EU’s executive branch launched the ENP. It has several partner countries, a map of which looks curiously similar to a map of the old Roman Empire. Under the ENP, the European Union would pay member countries in exchange for their good behavior. Israel is an ENP member country. 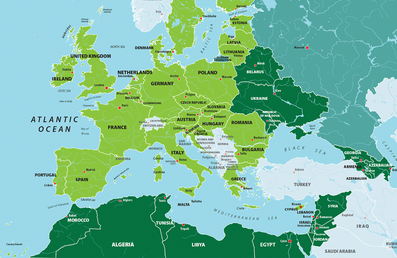 Here we have a revived Roman Empire making a 7 year contract with Israel and many other countries. So what’s missing? The Bible says that the Antichrist, specifically, is the one to make the 7-year contract with Israel and many others. Though he comes from the revived Roman Empire, a contract between the revived Roman Empire and Israel is not sufficient. In the previous video, we learned how Javier Solana is the top candidate for the Antichrist. Although he wrote the letter proposing the ENP in 2002, he wasn’t the one who actually caused it to last for 7 years. But more importantly, the ENP does not contain a promise of military protection for Israel. Which immediately raises the question. Is the European Union able or willing to provide military protection to its neighbors? 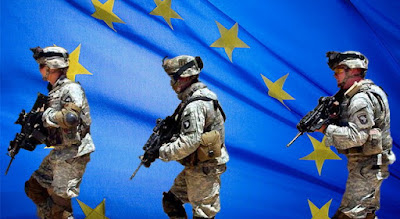 For this, we need to return our focus to Javier Solana. After a few years of so-called “retirement” Solana seems to be attempting a surprise comeback at the age of 74. He was asked by the European Parliament to draft a very large research paper, advising them on how to build an EU military union. The EU already has a monetary union with the euro currency area. Nevertheless, Solana and the EU Parliament wanted to build a military union for the EU, in addition to a monetary union. Javier Solana called this proposed military union the “European Defence Union.” 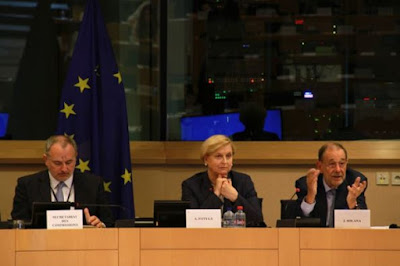 On 06/16/16, Solana presented his research paper to the European Parliament committee on defense. His research paper was based on many ideas he had proposed back in February 2015, in his pamphlet called “More Union in European Defence.” Back in March 2015, when Solana presented this pamphlet, he stated “"I will put all of the energies that I have left to push forward this process." With this statement, Solana shows a strong desire to catapult himself back into European politics, especially in the area of defense and security. He was so passionate about building a military union for the EU that he went on tour, presenting his plan in many European capitals. He went to all this effort, without any official EU position. 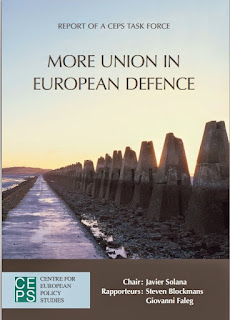 As a result of Solana’s research, the European Parliament adopted a resolution on “European Defence Union” in November 2016. Within this resolution, Parliament stated they intended for the EU’s military union to be established over the next 7 year period, from 2021-2027. In December 2016, EU member states launched another 7-year program, called the European Defence Fund. This has two sections, the first of which is a 7-year military research and development program.

Here, we see three major 7-year programs. The first is the EU-Israel relationship, which is already based on a 7-year program called the ENP. The second is the proposed European Defence Union, which could be used to provide security to neighboring countries. The third is the European Defence Fund, which enables the EU to invest in new military innovations over a 7-year period.. All of these programs could easily converge when the Antichrist finally makes his “covenant with death” for seven years.

But how does this relate to providing military protection for Israel for 7 years? Many prominent European politicians and government entities have been increasingly calling for the EU to provide security in its neighboring countries, in the context of these upcoming 7 year agreements. The Council of the European Union stated that “"The Council welcomes the new proposals to strengthen the security dimension of the ENP.” Javier Solana’s 2015 pamphlet on states that a European Defence Union should be created so the EU can be an “autonomous security provider in its neighbourhood”. Here, top Antichrist candidate, Javier Solana, is proposing that the EU’s military union be used to provide security for neighboring countries, just like the Bible says.Finally, Guy Verhofstadt, prominent member of the European Parliament, said "We need an European defense union to protect our neighborhood.”

What’s so important about the 7 years? It’s what happens halfway through it that makes all the difference.


“And he shall make a strong covenant with many for one week, and for half of the week he shall put an end to sacrifice and offering. And on the wing of abominations shall come one who makes desolate, until the decreed end is poured out on the desolator.”” (Daniel 9:27 ESV)

Jesus tells us some very important things that happen immediately following the abomination of desolation.


“So when you see the abomination of desolation spoken of by the prophet Daniel, standing in the holy place (let the reader understand), 16 then let those who are in Judea flee to the mountains. Let the one who is on the housetop not go down to take what is in his house, and let the one who is in the field not turn back to take his cloak. And alas for women who are pregnant and for those who are nursing infants in those days! Pray that your flight may not be in winter or on a Sabbath. For then there will be great tribulation, such as has not been from the beginning of the world until now, no, and never will be.” (Matthew 24:15-21)


After providing further details about this time of extreme trouble, Jesus says that he brings it to an end with his Second Coming.


“Immediately after the tribulation of those days the sun will be darkened, and the moon will not give its light, and the stars will fall from heaven, and the powers of the heavens will be shaken. Then will appear in heaven the sign of the Son of Man, and then all the tribes of the earth will mourn, and they will see the Son of Man coming on the clouds of heaven with power and great glory.” (Matthew 24:29-30)

This is all the more the reason to heed Jesus’ words when he says “Therefore, stay awake, for you do not know on what day your Lord is coming.”