Revelation 13: A Military and Monetary Pillar 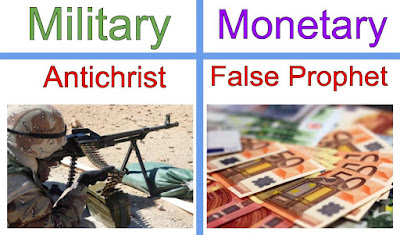 Below is a timeline of the development of the EU, particularly it's leadership in the military and monetary pillar.

Proposes Solana preside over the new body (PSC) that determines the “political control and strategic direction” of military crisis management operations. The Western European Union had transferred their military capacities to the PSC.


Decision proposed by Recommendation 666 is implemented. A Political and Security Committee is set up, which the EU High Representative Solana can chair in the event of an emergency. The EU's PSC directs existing military and civilian crisis management operations.

WEU dissolves itself, in light of the new Treaty of Lisbon, and the Common Security and Defence Policy. Mutual assistance pact in Treaty of Lisbon, similar to Article V of WEU Treaty, causes members to dissolve organization.

EU Leaders expected to formally launch PESCO.  This is an instrument by which various member states commit to more on military capacity development, as well as commit to more EU troop deployment. It would be a transfer of sovereignty in the area of defense. Furthermore, with PESCO, military decisions are made unanimously. In addition, participation in PESCO is completely voluntary, with no nation forced to participate. Finally, the EU wants to use PESCO to form its "common security & defence policy" (read: "common purpose") in defense. They state it is an opportunity for "like-minded" member states to do military projects together. See the significance of the bold words in this other article.


The Euro is officially launched for use as a currency throughout the first Eurozone states. This is the beginning of the EU's monetary union.


An informal group of finance ministers, called the Eurogroup, discuss financial matters of the euro. For the first time, they elect a semi-permanent President.


In light of the eurozone crisis, many EU members set up European Stability Mechanism, which is a loan bailout fund for countries struggling due to sovereign debt. This vastly increases the power of the Eurogroup and the Eurogroup president, since member states must meet strict criteria in order to become eligible for debt relief through this loan program.


To streamline EU decision-making, the EU Commission recommends merging the positions of Eurogroup President and the Economic and Financial Affairs Commissioner. This new position would be a de facto (or de jure) Eurozone finance minister position.

If this is true, we should expect to see a major leader emerging in the military domain, as well as the monetary domain. On the defense side, this could take the shape of an EU defense commissioner or an informal chair of PESCO meetings, similar to how the Eurogroup is set up. According to this website, this person will be Javier Solana. On the monetary side, the eurozone finance minister could eventually be the False Prophet.

Posted by David Wilkinson at 6:56 PM